In April 2014 Adrian Sims, a long standing member of Archery Ireland shooting out of Liffey Archers, posted a note to the Ashbourne Notice Board Facebook page to enquire if anybody in the surrounding area would be interested in joining an archery club.

The response to this post was so positive that Adrian made contact with a number of fellow Ashbourne residents, as well as Archery Ireland, with a view to getting the club up and running.

On the 6th of June 2014 Adrian met with Ashbourne residents David Molloy, Barry Sheridan and Marie Hegarty, it was at this meeting that the club’s name was ratified and the committee elected.

The current committee structure is as follows:

The club was formally registered with Archery Ireland in June of 2014. Shortly afterwards we took stock of our club training bows as well as a loan of straw target butts from our sister clubs in Greenhills Archers, Liffey Archers and Tullamore Archers. That same month we purchased the club’s first training bows and our logo was designed by Ronan Lynch of Lynch Design, Swords, Co. Dublin.

In August 2014 our we moved into Cushinstown Athletic Club with the help of Councillor Alan Tobin. Our new home 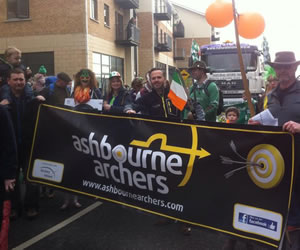 boasts a 60 metre indoor shooting range and it was here that we started our first beginners course with 6 beginners.

Since then, Ashbourne Archers have run a number of have-a-go sessions, supported the Ashbourne Youth Café fundraising initiative and taken part in the Ashbourne Race Day Festival.

On the 17th of March we proudly marched in our first St. Patrick’s Day Parade in Ashbourne and in May 2015 the club unveiled our new club designed by KIT design.

In June 2015 we delivered our 5th beginners course, held our first fundraising quiz night in Donaghmore Ashbourne GAA clubhouse and held our first club clout shoot on the GAA pitch on Milltown Road.

Today Ashbourne Archers has grown our membership to over 50 members, many of who compete in numerous field and target competitions around Ireland.

The club is indebted to our sister clubs Greenhills, Liffey and Wicklow Archers as well as local councillors, the committees of Donoghmore Ashbourne GAA Club, Cushinstown Athlethic Club, Ashbourne Chamber of Commerce, the communities and business of Ashbourne and surrounds.

The committee of Ashbourne Archers would also like to acknowledge the contributions from John Barr and Christy Banks, who have generously given their time and expertise to help shape Ashbourne Archers into the club that it is today.